Kally. A little bear who’s been on a big journey. And is going on another.

In 2007, after I first decided that I was going to go to the next Fanderson convention (in 2010 as it turned out), I knew I’d be travelling alone. D.C., as much as she’d loved to have joined me, couldn’t afford it. Being the shutterbug that I am, I knew that I’d be taking tons of photographs (especially to show D.C.), but that it was going to be nearly impossible for me to be in any of them.

We were on the train to Wellington, before heading to New Plymouth, when I resolved the problem. Another couple were enjoying the same trip, accompanied by a Furby which they were photographing at each stop. This seemed to be the perfect solution, and so, to show that I had “Been there. Done that.”  I realised that I needed a small photographic model to travel with me.

What followed was three years of checking out various candidates, but none of them were small enough to accompany me halfway around the world. Then, six days before I was due to leave for England, a parcel arrived from my friend in Auckland. Opening it I discovered a little pink bear; the perfect size (and colour) to be my companion on my big adventure. My friend’s name was Karen Hally (Thank you, Karen) and so the bear was named “Kally”. 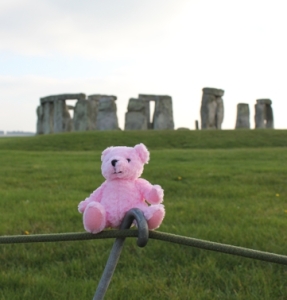 Pleased because she reached base camp

Made it to the top! 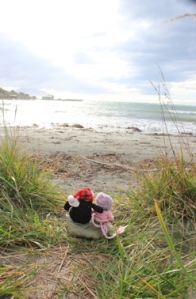 With her friend Scott in Kaikoura 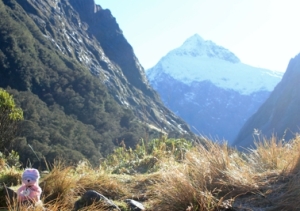 A little bear in some big mountains

Why is she wearing a multicoloured sash. As this year (2015) I am once again going to a Fanderson convention in England, I wanted her to wear something that said something along the lines of: “If you find me, please let my mum know on purupuss@msn.com.” What not attach it to a sash? The Tracy boys wear sashes when on their International Rescue duties.

But how do you make a sash for a bear that’s about ten centimetres tall?

I thought of using ribbon, but decided that I’d like something with the colour scheme that incorporated the Tracy brothers’ sashes. Do you know how hard it is to find multi-coloured ribbon? Especially ribbon with the colours pale blue, yellow, off-white, orange and lilac? Even a straight forward rainbow ribbon’s hard to find.

Make my own sash, of course.

I have plenty of embroidery cottons, so how about an tapestry sash?

But the sash is only about one centimetre wide? How can you keep it together when the edges are fraying?

Answer: With great difficulty and more skill than I’ve got.

I’ve got these embroidery cottons, how about a macramé sash?

I knew only one macramé knot; a square knot that formed a flat long “ribbon”. Great!

And it was quite pretty when I finished, but it twisted into a helix, which was effective but didn’t look like a sash.

After consulting Professor Google, I discovered how easy it is to make a friendship bracelet using only slip knots. Slip knots are something that any Girl Guide should be able to do in her sleep – and I probably have. Even better, the pattern created was a chevron shape. Nothing like action arrows to represent the brave and dashing Tracys.

The present problem was that while the knots were easy to do, using multi-threaded embroidery cotton (or “floss” as the Prof. called it), wasn’t. The threads had a tendency to unravel and not sit nicely.

Time to fork out for some proper macramé cord. After a purchase in Poland…

Yes… You read that right. Poland. Europe. Even with the freight it was cheaper than New Zealand and I couldn’t find any here anyway. After a purchase in Poland I whipped up a sash over the course of three nights. The start and the finish aren’t fantastic, and there are a few less than professional looking bits, and the ends are sewn together with blue cotton, and as of writing I STILL haven’t worked out how I’m going to attach the “email me” label, but I’m happy with it.

And as an added bonus, if she ever decides to go skydiving without a parachute again, like she did INTO the field off the fence in the above photos, we can hook her out by her sash.