Breakfast was a pottle of cereal and yoghurt bought from the Co-op.

We had planned on going to the historic docks first thing, but side-tracked ourselves by finding a Nelson trail to do later, and checking out a monument to Isambard Kingdom Brunel. From what I know of the man it represents the Clifton Suspension Bridge and the Great Eastern and SS Great Britain ships. 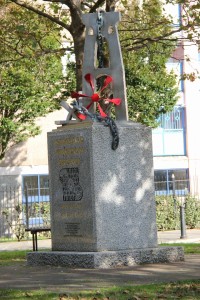 Brunel was born close to the St George Park where the monument was situated so we went on a hunt for that site. Judging by the architecture of the houses around about it appears that the area was bombed in WWII and any trace of him, apart from another plaque, has gone.

It’s the 30th September and I’m disappointed. Today it’s 50 years since Thunderbirds was first screened and Google hasn’t done a special Doodle for it. Doctor Who got one!

And I just wrote 30 years. I got an email from a DVD place yesterday advertising 50 years since Back to the Future. I sent them an email saying they were 20 years out and it must have stuck in my mind.

Another note. Every time someone in the room next to us opens and closes their door, it sounds like it’s ours. When Pen was downstairs checking the Internet I kept thinking she was coming back in.

Another note. The bathroom down the other end of the hall is only for rooms three and four. All the others seem to have their own en suites. So it’s only us and noisy door who have to share the bathroom.

After our side track it was back to our original plan and down to the docks.

We didn’t go into the HMS Warrior, but instead went to the Victory – the ship where Lord Nelson died during the Battle of Trafalgar.

They have a sign warning anyone over five foot to watch their heads. Even little, at 5’1” had to be careful – starting with the entrance hatch. 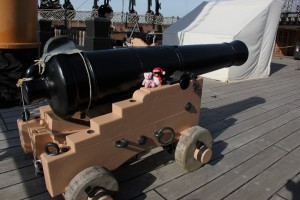 Some cannons were rescued from having been bollards. the bit from the right of Scott was what was out of the ground (with a cannonball in the spout) and the rest buried. When they recreated the Victory they had to go around town and dig out her cannons.

Just pull the string and stand well back. The bit that’s inside the ship is roughly how much was buried when these cannons became bollards. Must have been a job and a half digging them out again.

Some photos. Be prepared for more pulley blocks for Alan C. 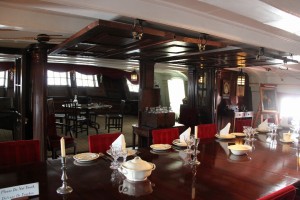 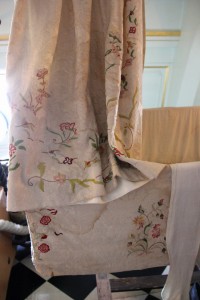 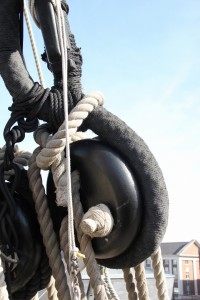 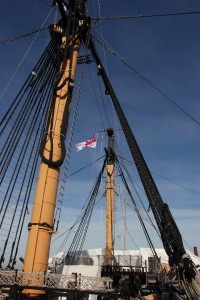 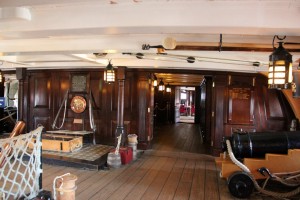 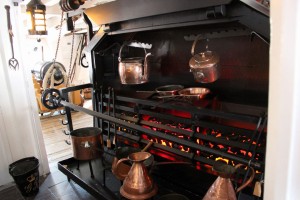 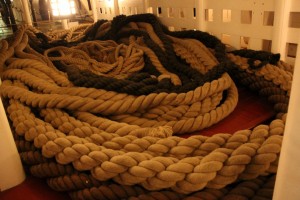 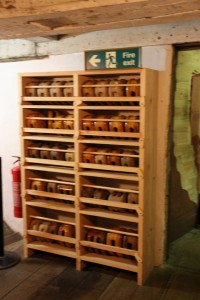 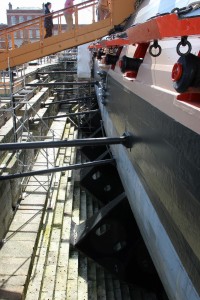 The spot where Nelson fell.

No wonder, when it’s so shiny and slippery. Actually he should have learnt from earlier that day. A crew member was standing on this exact spot and cannon fire cut him clean in two. They just dumped him overboard.

While I was waiting for “Pin” Pen at one point, we met up with the couple from Portland who we were talking to yesterday. Fortunately I had one of my patches in my bag, so I was able to give it to them.

The Victory is right next to the building that houses the Mary Rose. When the Victory was put into port for posterity they rammed her middle mast into ground so she’s pinned there, in Pen’s words, “like a butterfly”. The masts she has now are from an 18th century sailing ship and have been removed for the restoration that is currently being done to it. When the masts are replaced they will be lightweight replicas so that they won’t have to be removed again for future restorations. Remember that her entire weight is resting on her keel, so they want to take off as much weight as possible.

The Mary Rose was carefully lifted into her final resting place and a purpose built building assembled around her. The differing methods of preservation over the centuries. Also the differing levels of expertise and technology. 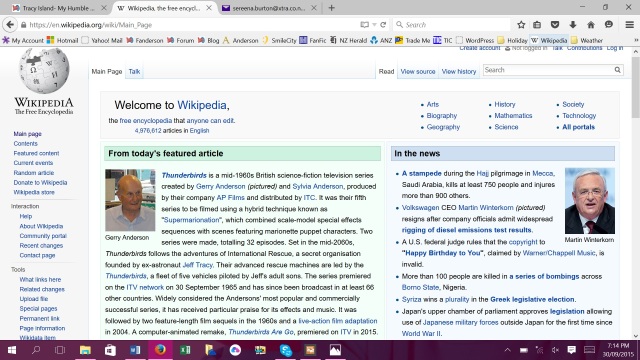 The Mary Rose was a warship from the days of King Henry VIII and was lost in the battle of the Solent in 1545. She’d been powering towards the French fleet, had turned suddenly, been hit by a gust of wind and had keeled over, watering pouring in through her open canon ports. Of course in those days very few sailors could swim and only 35 out of a crew of about 415 survived.

She sank on her side in the mud. Her topmost timbers were exposed to the water and had disintegrated over the centuries, but the side that was in the mud was protected to a startling degree by the anaerobic silt. Most of the ironwork has disintegrated, but when it was rediscovered it contained the largest collection of Tudor artefacts in the world. 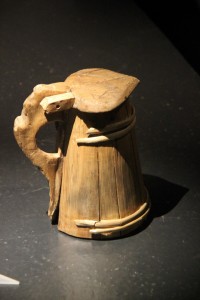 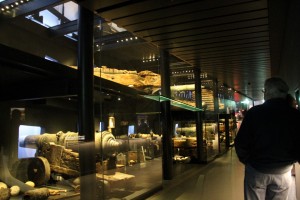 I have more photos, but the uploading’s slow. I’ll try to do it tomorrow. 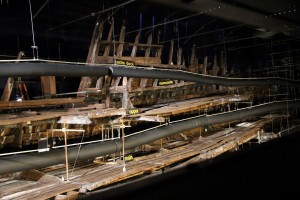 The museum is set out so that the various items recovered are on the same deck level as the actual ship. In time, when the preservation is completed, the dividing wall between the two will be removed and what is left will be an approximation of what was on the ship. 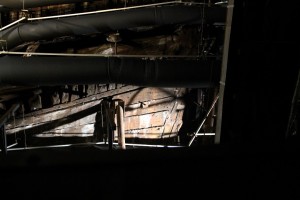 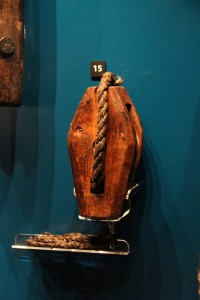 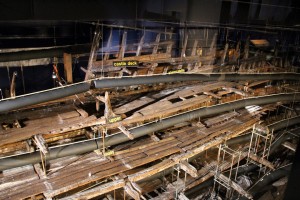 The Mary Rose was rediscovered in 1982, excavated, brought to the surface, and taken to her final home. Then she was continuously sprayed with clean water to ensure that her timbers didn’t shrink (which could have been as much as 20-50%). Once the next stage was readied she was sprayed with polyethylene glycol to replace the water and keep the timbers’ cells intact. At the stage where we saw her, she had huge black tubes around her, drying out the PEG. Once that’s finished she should be stable enough for the final stage of her display.

Of course all the artefacts recovered had to undergo similar preservation work. Over 26,000 items, including the remains of crew, some of whom were forensically reconstructed. The ship’s carpenter’s dog sits there as a skeleton.

Written in the train to London.

After the Mary Rose and a cup of lemon and ginger tea we decided to do the Nelson walk that we found that morning. Except that we couldn’t find any documentation telling us where to go. Asking locals ended up with a suggestion that we try the information centre at the City Museum.

As it was getting close to 5:00 and we thought the museum would be shut, we retraced our steps to the only sign we’d found and discovered that it was the first point on the route – Landport Gate. Pen took a photo of the map and we started off… And couldn’t find any other points of interest. So we decided to head down to the waterfront. Pen wanted to show me where the Mary Rose sank.

Our hotel – The Duke of Buckingham. He was assassinated just down the road.

It was a lovely evening and it so happened that on our travels we not only came across the other points of interest on the Nelson walk, we also found the Millennium walk along the waterfront. 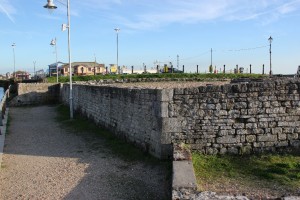 We found the remains of Spur Redoubt, which Nelson would have, as the signage so emotively puts is: taken “his last steps on dry land.”

But what really excited me was the remains of the Royal Garrison Church. Exciting because I remembered an episode of Time Team where they dug the fields behind it to try to find the remains of a pilgrim monks’ hospital. 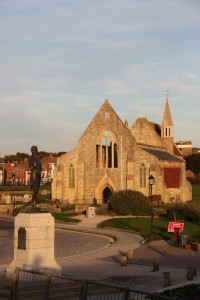 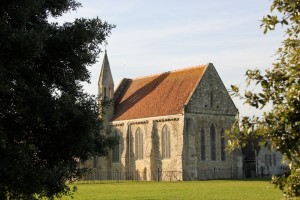 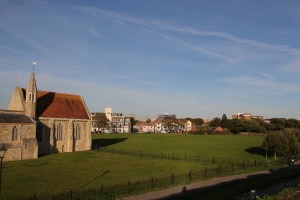 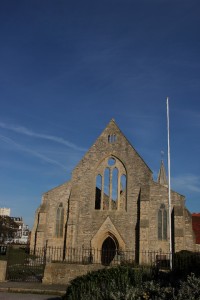 Out in the bay we could see (and hear – it was very noisy) the Isle of Wight hovercraft coming and going. We were even there when it was on the hard and watched, protected by rather sand and water-blasted windows, as it lifted up on its inflated skirts and slid sideways into the water.

We also walked past Clarence Pier West. This isn’t a traditional pier that sticks out into the tide, but a “landward pier”. But it had the bumper cars, the roller arcades, and the arcades. As I hadn’t seen one before we checked out the arcades. One of the machines, which cost £3.00 was a have your caricature drawn. I decided to give it a go as at least you get something for your money.

Bollard made from a cannon 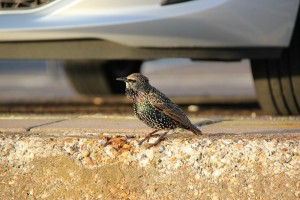 On the walk back we saw the hovercraft (ten minutes to the Isle of Wight) return past a Martello Tower. These were installed as harbour defences during the Napoleonic War.

We also saw the monument to all the Australians who left England – sailing out from Portsmouth.

It was at about this point that I “ran out of film” and had to change SD cards.

Back to the hotel to offload the things we didn’t need (not including my camera) and then we went food hunting.

We had a couple of options. The Tin Tin Chinese Takeaway, some other place that offered two for the price of one meals, or the Chinese over the road from the hotel.

As we made our way through the Gunwharf Quay we had to fight our way past a horde of students lining up back on themselves in a queue that went for miles. We pushed through explaining that we weren’t queue jumping. Somehow I don’t think they would have thought we were as we asked a security guard what was going on. He sounded very disgruntled (and didn’t look much older than the students) when he explained that it was a “student lock-in”. I asked if he’d like to throw away the key. He said that of all the security jobs he did, corralling students was the worst as they got violent as they got drunk.

We decided to get well away from Gunwharf Quay, so it was back to the hotel and over the road to the “Good Fortune” Chinese Takeaway. We had a set menu for one, (sweet and sour port, mushrooms, fried rice, prawn cracker, dried seaweed (which had an unusual texture, and which I enjoyed), and chicken satay skewers. All too much for the two of us. 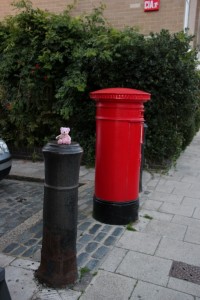 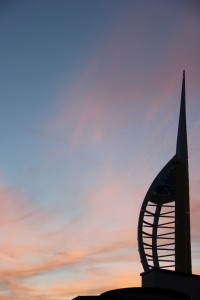 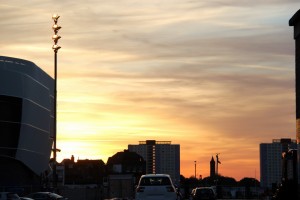 Then it was to bed, sort out the photos, Skype chat with D.C., and started to type up the blog, but I ran out of battery power as I started, so I plugged it in. (Overnight. I don’t like that) After that there was nothing to do but go to sleep.

Do you realise that you can (should be able to) click on a photo for an enlargement? That’s if Word Press behaves itself. It doesn’t seem to like pictures at the moment.