We went to Bletchley Park today.

“Where and what is that?

After a good night, and breakfast, Elizabeth, Pen and I headed off to the local railway station. When Elizabeth had checked on line at 7.30 this morning, the rail service had assured her that the train to Bletchley was leaving from her station. By the time we got there (dragging Pen’s/my case and all our other bags with us) the station signage was saying that that train had been cancelled.

Not a problem, we can walk to the local bus stop, catch the bus to Coventry station, and then go on to Bletchley from there.

So that’s what we did.

I wonder what the other people on the train made of three adult women discussion Thunderbirds and Thunderbirds Are Go!?

I’m typing this on the train from Birmingham New Street Station to Shrewsbury and we’re heading due north. I know that because there’s a glorious sunset (almost as good as Thames’) on my left…

You do notice the church and cathedral spires on the skyline in England… I can see two against a backdrop of red and blue sky.

From Bletchley Station it’s only a short walk to Bletchley Park.

Have you heard of Bletchley Park? You probably wouldn’t have until the 1970s, but if it weren’t for them, you wouldn’t be reading this blog.

Bletchley Park was where Alan Turing (“The Imitation Game” movie) was one of many geniuses who worked on decoding the Enigma coded messages that the Germans were using for despatches during WWII. It wasn’t only the Germans’ whose messages the Allies were intercepting. The Japanese and other “foes” had their own methods for sending coded messages, all of which had to be decoded for the war effort. There are those who state that if it weren’t for work of these people (8000 at its peak and with 75% women on site), then the war would have gone on for two years longer with thousands more casualties. 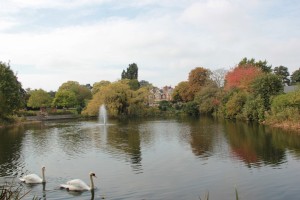 You wouldn’t think this place ended WWII early and marked the beginning of the computer revolution, would you? 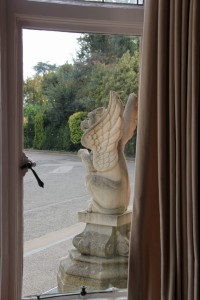 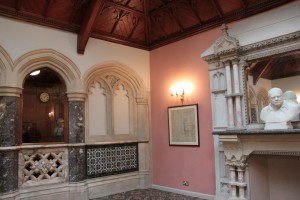 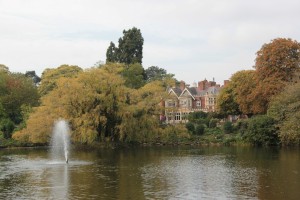 We did the visit the wrong way around, but didn’t really have much of an option, because by the time Pen discovered that free guided tours were available the only spaces left (three – which worked well), was for the 2.30pm tour… dragging my/Pen’s case between us as there weren’t any lockers or places where you could leave your gear.

Because that tour was so late, we wondered around and tried to take in everything that was shown to us… Without much success. It was interesting, and well set out. (The buildings were refurbished in much the same way that it would have been when it was in operation – At least as close as they could get without many photos to work from… It was top secret remember.)

And now it’s splashed all over the movies. These are some costumes and props from “The Imitation Game”… Which I haven’t seen. 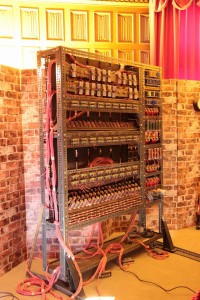 Why 25? Because the Enigma machines couldn’t use the same letter as in the original message.

What made it easier to crack was that reports or dispatchers tended to use the same phrases – like “weather report” if they were a ship keeping an eye on the weather, or “Heil Hitler” 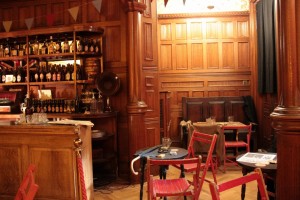 But without the guide pointing it out, there was a lot that we missed. Like I hadn’t realised that the low brick walls that surrounded all of the wooden buildings, were there as bomb shields.

Only one building that was shown to us was made of blast proof brick. That was the building that had held the “Bombe”. This was the machine that was… we’re not allowed to use the word “programmed”… assembled to decode the German’s messages. 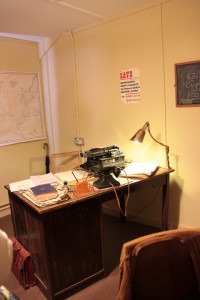 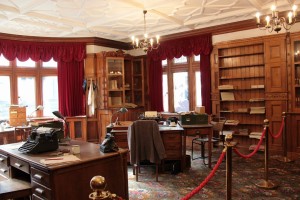 Staff used to use their mug and then throw it into the lake. Alan Turing chained his to the radiator to stop that happening.

To enter the main part of the complex to visit the museum was quite clever. The entrance way was set up as if you were stepping off the train (through the train doors) and into Bletchley – then you could learn a bit of background about WWII. We didn’t stay here for long.

We started out listening to a man explain how the “Bombe” worked. When you consider that the Enigma machine had three rotors (four in some naval models), a reflector, and some other way of encrypting messages – giving 159 million, million, million, give or take, options – creating something capable of reversing that encryption was a tall order – and exactly what they managed to do… Don’t ask me how. It was all very interesting and I didn’t understand much of it.

And if you’re wondering why I was interested in Bletchley Park, it’s because it was the birthplace of modern computing. It was the home of the “Colossus” computer. The site is considered so important that companies like “Apple”, and “Google” sponsor it. (And the rumour that Apple’s logo of the apple with the bite taken out of it is based on Alan Turing’s method of suicide is urban myth… Much to Apple’s disappointment.)

Sadly the complex that holds the replica of the Colossus and has an extended history of computing is held behind “closed” gates by a separate entity. You can visit the museum, but you need to pay another entry fee and have the time to do it.

And the reason why closed was in speech marks in the previous paragraph is because when Pete, our guide, was standing in front of the electronic gates between the two sites (they were originally both Bletchley Park) he commented that the last couple of times he’d done so they’d opened of their own accord. He said this just as the gates opened of their own accord. And continued to creep open whenever he wasn’t looking. Some of his listeners asked if it was possible to walk through so they could see Colossus (which I would have loved to have done), but Pete said that the two organisations were run by two separate entities, both relied on entry money, and he worked at both so he didn’t want to get into trouble.

We didn’t have enough time to hang around anyway.

The manor house had been the original location for the codebreakers, but as time went on and they realised that they could do more and more with more man power. (After Dunkirk, Winston Churchill practically said to give them what they wanted.) With more manpower came the requirements for more buildings.

The present café to the left of the original building, was originally “Hut 4”, where they eventually concentrated on naval messages. (And I hope they did a better job than they do with the café. All the food – sandwich type and soups and roast meals, were jammed up at one end of the room and there wasn’t room for everyone to get what they wanted. That coupled with only one till being operational (they did fire up #2 when we were waiting), made for a stressful start to lunch.

Hut 4 in the centre of picture, to the left of the original house.

Hut 6 was for codebreaking Enigma and Hut 3 for translating it. When those buildings got too small they moved into big ones called… Hut 6 and Hut 3.

That way you could take something to a Hut without knowing what was going on in it. Secrecy was everything.

The old buildings were renamed. The old Hut 6 became Hut 16 and Hut 3 became…

It seems that even hyper-intelligent mathematicians can be superstitious.

One thing that I liked about Pete’s talk, was that he admitted that without the work of some Poles, Bletchley, and indeed the early days of the war, wouldn’t have done as well as they did. The Poles had already started cracking Enigma before Bletchley was formed and their ideas formed the basis of Bletchley’s work. (Also the Polish pilots were better and more efficient flyers than the “English”.)

It’s because of the Polish influence that the initial code breaking machine was called “Bombe”. The Poles called their version “Bomba”.

And they both helped to stop bombs.

Memorial to the Poles who did the groundwork that went towards cracking the Enigma code.

We didn’t want Pete’s spiel to end, but were glad when it did because we were running close to the time when we were going to have to leave. Both Elizabeth and I wanted to get cloth badges. (I’m sticking mine onto my “Keep calm and call International Rescue” bag – but cloth badges seem to be out of fashion at the moment. Also I have had to ask for someone to be a translator. When I asked at Goathland for a cloth badge, Rosemary told me that they’re called patches in England. It didn’t matter much. Whatever I called them my accent seemed to get in the way… But I don’t have an accent! Everyone else does!!)

Bletchley didn’t have any cloth badges.

And then back to Pen’s to watch a documentary about Gordon Welchman – a man who was equally as brilliant as Alan Turing, but whose work at Bletchley has been even more forgotten.

We also watched ITVs top nine (that’s where we came in) theme tunes. Let’s see if I can remember.

9) Agatha Christie’s Poirot
8) Morse
7) The Avengers
6) Van der Valk
5) Ermmm Downton Abbey?
4) Ummm – something else. I’ve probably got these all up the shoot. I’m only sure of the first and last two
3) Roald Dahl’s Tales of the Unexpected.
2) Thunderbirds!
1) Yakety Sax – the Benny Hill closing credits theme. ?????

After that I went to bed to type up the blog and Skype chat with D.C.

All photos posted… I think

And I’ve just ejected into Pen’s conservatory a spider that was about five centimetres long, brown and very fast. It looked like a huntsman-type creepy crawly. Just as well I’m not the screaming and running-type – even if I didn’t fancy it walking over me in the middle of the night. 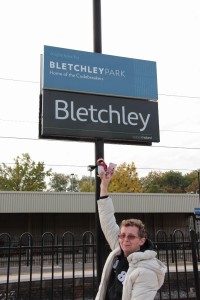 Pen, Scott, and Kally at Bletchley

Elizabeth and Pen (and Scott)

Elizabeth in her natural habitat. Reading a book. The case is Pen’s/mine and we all had to take turns dragging it around Bletchley. 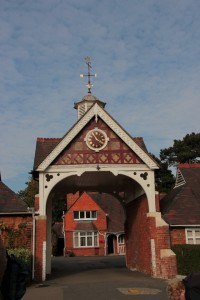 Through this gate was the main admin area.