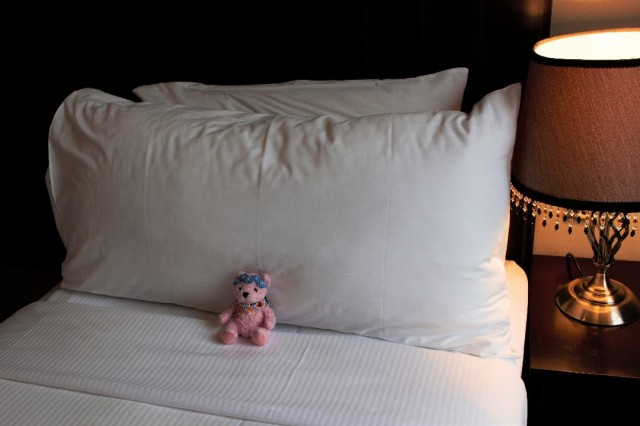 Kally in her flapper headband, ready for dinner last night.

It wasn’t such a rush this morning, but we went down for breakfast – in the Ruapehu Room. There were various fruits available, bacon, scrambled eggs, fried tomatoes, sausages, hash browns, hot cakes, pancakes, mushrooms, baked beans, pastries – small Danishes, croissant, banana bread, muffins – toast, various teas, coffee… It was all buffet, so you could eat as much or as little as you liked. The lady at the desk ticked us off as being eligible for our meal, by asking which room we were in. Naturally I had 402 in my mind, so I kept on saying that instead of 603.

Pukekohe Travel were offering a trip up to the Bruce for those who were interested. D.C. decided that she didn’t want to go, but that I could go by myself. I didn’t know what it was, so I did a Google Maps search, and discovered that Bruce Road is the road up to the Whakapapa Ski Field. This morning dawned lovely and clear and I convinced D.C. that we should go on the trip, so we paid our $15 each.

I’m glad we went, and so was D.C. The trip from the Chateau was only about 15 minutes long – and we managed to score a front seat, much to D.C.’s relief.

Once we got to the ski field, we could have hung around Whakapapa or paid the $35 each to take the ski lift. Once again D.C. did the “you could go by yourself” bit, to which I replied with the “it’s no fun by myself” bit. So I paid for us both.

I think she was a little worried about the getting on and off the seats as the chair lift circled around, but they stopped the chair lift on the bottom ride and slowed the top one right down, so it wasn’t an issue. Especially as the men helping us were so friendly and eager to help. I had my daypack camera bag, and I had to wear that on my front so that I could get on and off “quickly” and easily. 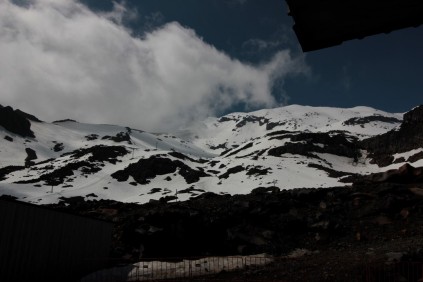 The first leg was on the newest ski lift and this one had soft cushions. But, because most of our group were in the older age group, they had to stop the ride to give them a chance to board. This meant that those of us already on the ride had to hang, swaying, in mid-air until we set off again. 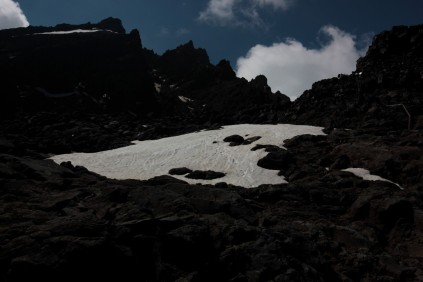 The second leg of the chair lift was the original one and had slatted, slightly bucket-shaped, wooden seats. We were joined on this journey by a young man who was planning to walk to the top from this point and then ski down. He was also taking photos as we did the journey. We wished him well on his upward, and downward, leg.

Up here the clouds were beginning to move in, but it was still largely sunny. It wasn’t too cold either, although we were both glad that we had our jackets on the downward trip when a cold breeze blew in. (Mine’s my usual raincoat, which is also a three-in-one jacket, which I’d “lined” with the warmer jacket from my “winter” “ski jacket” three-in-one. The problem with this time of year is that, although we’ve had brilliant, warm weather, anywhere – National Park, Whakapapa, or Auckland, could be cold and wet.)

Hundreds and hundreds of midges

The trip down was a lot smoother. Probably less unsure people trying to board all at once.

I checked out the Whakapapa shop, whilst D.C. had a toilet stop. I was taken by the monogrammed ski jacket. It would be fun to have one with “Burton” written on it. 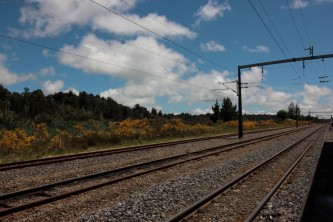 Everyone sort of arrived back at the bus at the same time, so we left earlier than anticipated for the Chateau. After a bit of an explore there, and some more photos – I wanted one of D.C. in the picture window from the outside. She thought I wanted it from the inside and was facing the wrong way waiting for me to appear – we boarded the final bus back to National Park. 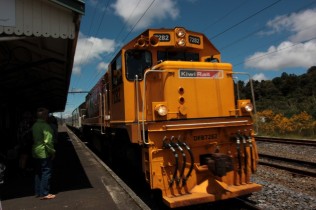 Here, many members of our tour bought and had lunch in the station café while we waited for over the hour until the train arrived. D.C. and I had already decided, in part because of the queue in the station, to wait until we were on the train and enjoy some Wishbone delicacies. Which we did – D.C. had potato gratin (I had a square) and I had Indonesian rice (D.C. had a forkful.) Later on the train and Pukekohe Travel crews came around with tea, coffee, hot water, packets of three bliss balls, and, as a special treat, two chocolates – one with Santa on and one with a sprig of “holly”.

We’re in seat 7A and B in carriage D, and my commentary headphone jack was broken. Either someone had jammed something into it, or the jack was warped. D.C. and I had to listen to the Raurimu Spiral commentary, firstly with each of us twisting the earpiece of the Kiwirail supplied headphones so we could both hear it, and then, after a bit of hand sanitiser, my noise cancelling earbuds.

We had brilliant weather all weekend – until we got to Auckland, then we got spots of rain on the windows.

We got to Westfield and got held up. I’m not 100% sure why, as it wasn’t a recognised stop, but the step into our carriage had jammed on the platform and we couldn’t move. The steward was trying to get as many people as he could to put weight on the footplate above it, but that didn’t work, so he had to get the driver out to have a look. I don’t know how they got it shifted, but we were stuck here for about ten minutes. Long enough for me to take the headphones double adapter back.

Frank, or Pukekohe Travel had arranged for a shuttle bus to pick those going to the vicinity of Quay Street, to be taken to Quay Street. As that was only two blocks away from the Grand Mecure, and we didn’t have to pay, we took advantage of this. We also walked with Frank to Customs Street.

We booked into the Grand Mercure – room 611 this time – with a little problem that they hadn’t remembered D.C. paying cash for yesterday’s breakfast, which she had. They got that sorted and we went up to our room. After a quick unpack, as it was after 7.00pm, we went back up to the Vue again. We wanted to get some evening photos this time. The two male wait staff were both very nice and helpful. One appears to have a mild case of cerebral palsy or something, but it wasn’t stopping him. It just goes to show that, frequently, all that’s required is for someone to show some faith in them.

I had a chicken on pasta dish, and D.C. lamb. Then she had a hazelnut desert, and I had chocolate tart. It was all much more high class than that, (and more expensive than it should be, even if it was very nice), but you get my drift.

And then, having taken tons of photos, most of which will be out of focus as it was dark and we didn’t have tripods, we came back to room 611 and went to bed. 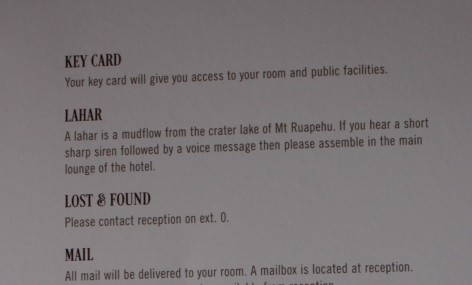 Only at the Chateau Tongariro