You’ll never guess what this is!

One problem with writing up a daily blog. The time it takes to do it. I don’t even know if I’ll get the chance tomorrow. The 100th anniversary of Taranaki Museum/Puke Ariki finishes at 11.00pm. And I’m guessing that the Topp Twins will be the final act.

But still I’m able to get into a nice warm bed. But to plug it in I have to pull the bed out from the wall, get the cable around the side of the bed, plug it in at the head of the bed, switch it on, and make sure it’s at the right setting. And then I have to reverse all that when I want to get into bed.

But what did we do today?

10.00am we were booked in for a guided walk with Mike Nightingale. Jenny… something showed up. No complaints as in the main she was very good.

About 9.30 it pelted down, so I made a point of wearing my waterproof shoes. They are walking shoes (I wear them to work when it’s raining), but they’re not as comfortable as my Allbirds.

We were the only two on the walk, which always makes for a personalised experience. As was that she had family stories to slip in. Like that the first cow in Taranaki walked all the way here from Wellington. Its name was Jenny. Or that her great-great x? grandfather was in the family home, clinging to his mother’s skirts when one Maori chased another into the house and cleaved his head in to. It was retribution for something, I can’t remember what, but it would have been traumatic for the family.

Some of the things she got slightly wrong – like saying 19## instead of 18##, and she told us that the building on one corner was Art Deco with the flourishes, from 1890 to 1920. The opposite corner was Art Deco with the more stylised features – that was 1920 to 1940. And another corner was a 1960s box. See what’s wrong with this? She meant Art Nouveau from 1890 to 1910. (Wikipedia’s a wonderful thing when you’re looking up things to do with your flapper costume. It’s remembering that information that’s the tricky bit.) 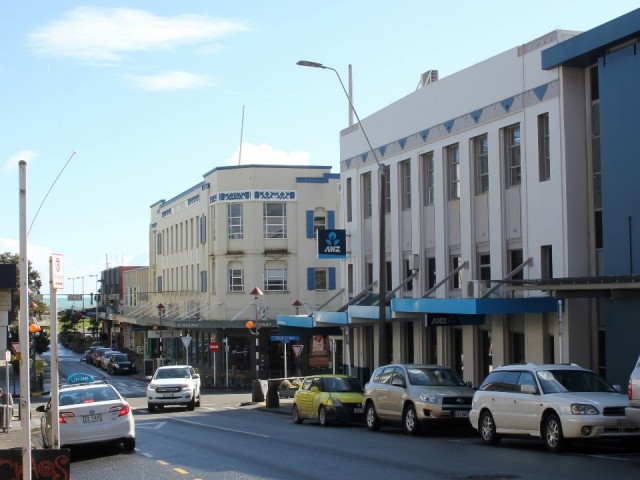 Art Nouveau on the other side of the street. Art Deco on this side. And the yellow care is parked where the men’s underground toilets used to be.

But aside from these odd slipups, she was very good to listen to – even though we’ve forgotten most of it.

When the walk was over, we asked Jenny where she would recommend for lunch. She (literally) pointed out the Chaos Café, so we went there. It was noisy, but the staff were fast, friendly, and cheerful. I ordered a Monsieur Croque for D.C., cheese, pineapple and ham toasted sandwich (when did they become toasties?) for me, a big slice of carrot cake for us both, and two Aztec hot chocolates – which, when they turned up, had a large Whittaker’s sante bar across the mouth of the cup. If there’s one thing that’s better than a marshmallow with a hot chocolate – it’s a large piece of Whittaker’s chocolate. The hot chocolate seemed to be layered – coconut flavouring on top, then afterburner chilli, then cinnamon. Yum.

But why do modern establishments have to have the music so loud that you can’t hear each other – and the staff – talk? That was the one thing wrong with it.

After that we went back to Puke Ariki, left our gear in the same locker, and checked out the settlers/life in Taranaki display that we’d managed to totally miss on Tuesday. Another very good display.

Following that we went across the skybridge to the archives library. I said that we were hoping to check out anything on our relative.

“What is their name?”

Laura gave us a guided tour. Starting with the archives room where thousands (no joke) of Uncle Fred’s scrapbooks are kept. Do I need to explain his scrapbooks? Probably. Unless I’ve already done it and I’m too tired to remember.

Uncle Fred would buy three copies of every newspaper and cut out each article. (Two sides to each paper, remember, so the three copies was to ensure he kept everything.) He would go to sales and buy trunk loads of old books. (Literally.) He would take each book that had no value and cut out every second page. Then each book would be covered with wallpaper (we’ve got some of the sample books that he used at home) and labelled with identifying labels on the spine. Perhaps Egmont – 1st January 1954 to 8th April 1954. Or Weather – 4th February 1956 to 29th August 1956. Or a family name. Or one of the first boats into New Plymouth. Or clubs and organisations. Or… just about anything you could think of. The clippings relating to the heading of each book would then be glued into that book as a reference. This meant that if Uncle Fred, or anyone, wanted to find out… say… what the weather was like on Mt Egmont (Taranaki) on the 5th July 1942, when a certain person got lost climbing the mountain – they could look in the Egmont book for that date, or the weather one, or the one that had information about the “certain person.

As Ann Shelton said: This was his Internet.

Who’s Ann Shelton a nationally recognised photographer who was the artist who photographed all of Uncle Fred’s scrapbooks at Puke Ariki in 2006. This artwork became “A Library to Scale”. And it was to scale. She used a large format camera to take the photos and then had to send the film away to get developed and wait with baited-breath for it to return. http://www.annshelton.com/works/a-library-to-scale-part-1

It was also a virtual library. You’d walk in and think you were in a room with real books. “Oh that looks interesting…” and your hand meets 2D print.

Anyway, Puke Ariki has all of Uncle Fred’s books, aside from the few that we still own. At Puke Ariki they line the entire back wall of the archive and two lots of shelving.

What’s gratifying is that researchers still use them. Uncle Fred would be thrilled.

We then had a look at a “public file” on Uncle Fred and then Laura showed us the display cabinet that houses some of his books and a brief precis about him.

It’s good to see him finally get recognised. When he was alive he was regarded as a crazy man who always wore shorts (easier to dry legs than trousers), jandels, and – because he only had quarter sight in one eye (One was poked with an umbrella and the other he was jumped on by a bloke wielding a screwdriver) would, when crossing the road, stick his walking stick out in front of him and march across.

Following that we decided to hunt down the site of where his family home had been until he moved it to Sentry Hill. So here is 55 Gill Street! 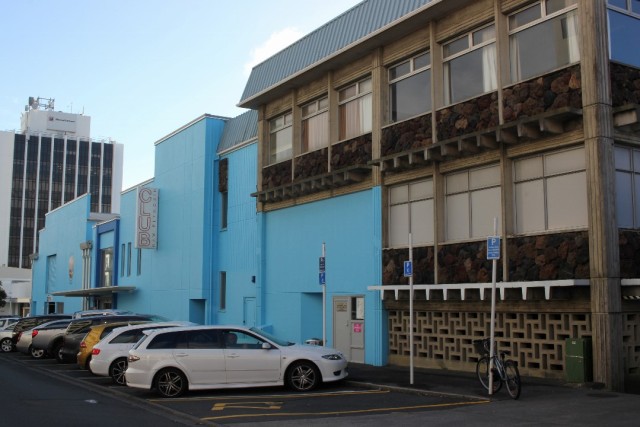 Because we’re taking a bus tour tomorrow, we went into a chemist and bought some ginger sweets to ward off motion sickness. (Which D.C. was, unusually, less worried about than I was.) I also bought some earplugs for tomorrow night.

We were told by a man, when we were admiring a duck and her duckling (eel food, he said. To which I responded – “Ah, yes. But which is the native?”) that there were a lot of native eels further up that creek outside a café. So this evening we checked them out. There were a lot.

Having photographed them, and dodged a passing shower (the first since this morning’s “downpour”) we went to the coastal walkway to photograph the sunset. I left D.C. by the Len Lye Wind Wand and went a short way along the walkway to a lookout.

The sunset wasn’t as orange as Monday’s, and didn’t reflect off Paritutu nor the chimney, but it was still nice.

Apparently, according to Jenny, the chimney was part of a power station, which had all been pulled down except the chimney – because it was full of asbestos and had become a local icon.

My fitness tracker beeped 10,000 as we walked back to the unit

This evening we had dinner in the White Hart Hotel. If you can call it dinner and in the hotel. The “restaurant” – it was more of a drinks and nibbles establishment – was called SNUG and may well have been in the original snug. Or just the bar. We sat on cushioned bench seats around low coffee sized tables and tried to select our platter dishes.

Fortunately, D.C. had brought a torch with her, so we were able to read it. We had “Melon Cooler”: watermelon, lemon and mint to drink. The platters we shared were two fresh steamed (Asian style) buns with sliced BBQ port, mustard greens, and peanuts. (Not sure if the peanuts were there, but it was nice.) Also crumbed kumara and ginger balls. Also very nice. The waitress came over to check we’d got our crumbed kumara and I told her that I should say no so we’d get some more.

Dessert wasn’t on the menu but was banana cooked in spring roll pastry with crystallised caramel and cream. Once again, very nice.

But if they’d asked if I wanted to give them a tip, I would have said “Yes. Turn the music down and the lights up.”

And then it was back to the until to download 143 photos and write this up.

Some of my photos haven’t uploaded, so here’s those that have.

Either a big elephant or a small building