Last day of our holiday. Who knows when we’ll get another?

We didn’t really have anything planned today.

We walked down to Puke Ariki and I felt something fall onto my shoulder. Looking down I could see a bit of plaster that had fallen off a building that was being done up. (But not the area where the plaster had come from.

Lucky it wasn;t bigger nor heavier

I was lucky it wasn’t bigger, heavier, or hit me on the head.

As it’s the weekend, we thought that we’d get the chance to check out Richmond House. It was due to open at 11pm and we were there about 10.30, so we went into Puke Ariki – and had our photos taken and a chat with “the Queen”, who was still wandering around. (Today was the children’s party to celebrate the 100 years.)

D.C., “Lizzy”, Charles the corgi, Sereena, Kally. The photographer was a professional who used my camera. I joked that it would be the best photo ever taken on it and he admitted that he’d put it onto Automatic to be safe.

We went out to Richmond House and it still wasn’t open. So we went back into Puke Ariki (it’s in the grounds. It was originally called Beach House, but when someone bought the land and wanted to knock it down, the locals made a hue and cry and it was shifted to the land next to the museum. It’s only open weekends and public holidays – except for this one because of the 100-years.

So we thought we’d check out the virtual reality in Puke Ariki. It wasn’t going because of the mass of people who were there today.

So we went to the i-SITE and asked what there was to do within walking distance. They suggested hiring a couple of electric bicycles. To my surprise, D.C. was quite keen on the idea, so we walked up to the shop and hired a couple of bikes ($30 each). The problem came when D.C. tried to get on.

The lady tried to make the seat as low as possible, and I could just mount mine, but D.C. just wasn’t comfortable not having a good grip on the road with her feet. She was also concerned that all our walking had hurt her knee and she didn’t want to put extra strain on it. So we got my $60 back. I don’t think the lady was that impressed.

We decided to head back to Chaos Café just for an Aztec hot chocolate each (and a Whittaker’s Santé bar), but ended up sharing a muffin as well. This lady was pleased to see us… Again.

Back to the i-SITE for further suggestions, and they suggested the coastal walkway. So we did a gentle stroll in the opposite direction to last time. (With a few minor spits.) We got as far as the Aquatic Centre and had a cheese, pineapple, and onion toasted sandwich each. Which looked very nice on the wooden platter with the little bowl of chutney. The food at the Rock Pool Café was tasty and cheap.

Back along the walkway to Puke Ariki, in the hope that we’d score some of the birthday cake. I think the multitude of kids had eaten it.

We then went back to the room and relaxed for the next few hours. I should have been sorting out my blog, but I couldn’t be bothered, so I read a few chapters of my latest story I’m uploading to Fanfiction.net and did some proofing. 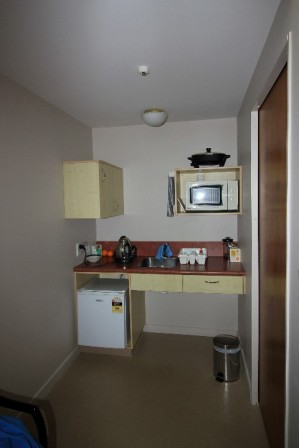 I’d just decided that I needed to get with my blog, when I remembered that the i-SITE had a web cam shot of Mt Taranaki. What was it like now? So I checked all the ones I could find and it was relatively clear.

I made a decision

Leaving D.C. relaxing on the bed reading about David Suchet and Hercule Poirot, I took off for Marsland Hill.

Typical. Although I could see the nearby Kaitake and Pouakai (I think. They’re older volcanoes.), I couldn’t see Mt Taranaki’s peak. So I had a wander around (as I was doing so my tracker told me I’d done 10,000 steps), and had a chat to an Australian man, who’s currently working in Hamilton and was in Thames last week, who was also hoping to get a photo of the mountain. As it wasn’t coming to the party yet, but could do, he was going to drive out to Te Rewa Rewa bridge and (hopefully) score some pictures there.

He was just leaving when I saw a spot of intense white in the cloud above the mountain. Then as I watched…

There was an opening in the fence behind the observatory, and it had clearly been used many times as a walkway, and no one appeared to have made any attempts to close it, so I went back there and got a better view.

It was after I took this photo, that Kally fell backwards onto the other side of the fence.

While I was there I could hear some tinkly music behind me. (Which reminds me of Grandpa, who liked “the tinkley music” of the St Trinan’s series of films.) I couldn’t work out what it was… I didn’t think it was my cell phone. And then I clicked. The carillion was on the hill behind me, and it was playing a tune. The only time I’d heard it.

Kally fell over after I took this photo too. But didn’t fall off.

I would have liked to have stayed longer, but though it was close to an hour and D.C. could have been getting worried – especially when sirens started screeching along the street.

But it did mean that I missed out on the “golden hour” colouring the peak. But I did get it colouring the Govett-Brewster and White Hart Hotel.

But, as I’d found a spot at the bottom of the hill where you could see the summit, I convinced D.C. to come back with me. I made it to the top again, a long time before she did, but she still got to see most of Mount Taranaki. Even if it was getting dark.

It was a good evening, we saw Mt Taranaki, we could hear Tui, and we could smell jonquils, irises, freesias, and daffodils. It was almost a complete sensory experience. The taste came later.

We weren’t sure what to have for tea. I would have been happy to have gone to Café Turquoise again, but D.C. wanted something not exotic. So we found the Marinovich’s Seafood Restaurant. Nothing really appealed to me, but I had the crumbed chicken with aioli and sweet chilli sauce entrée and two side dishes – seasonal roasted vegetables and baked potato with garlic butter. It was very delicious. (The cook even came out to check if I wanted garlic or rosemary and garlic. I said so long as it had garlic…) D.C. had the entrée crumbed scallops and roasted vegetables. She enjoyed that too. The desserts looked very tasty (we were eyeing up the table next to us), but decided against it.

So we came back and I packed my bag.