This afternoon we wanted to go to the Dominion Museum (I think that’s its title) as there’s a display there, put on with Sir Peter Jackson’s assistance. As we’d just come from Weta, it seemed to be appropriate to continue to see their mastery.

Okay, I hate war. I hate anything that glorifies war. Until we start honouring those who risk their necks to save lives the same way that we honour those who are trained to kill, I’m not interested in the way that people think that being a member of the armed forces earns automatic adulation, no matter what sort of person you actually were.

But WWI is history. It actually happened, and it can’t be ignored.

Being the middle of the day, D.C. was able to use her Gold Card for a free bus trip back into central Wellington. Being short of actual cash and a non-EFTPOS user, I had to borrow $5 off her.

We could have caught the #2 or the #18 bus, both of which went to Wellington Central, or the Karori one. Naturally, the first bus that came along was the Karori one. But it went into central Wellington too. Just not to the same bus stop.

That was fine, just so long as we could recognise where we got out and I didn’t squash my poster.

We were trundling down one of Wellington’s many hills when I saw some brick red columns nearby. “Isn’t that where we want to go? Where those brown stacky things are?”

The bus driver pulled into a bus stop and we got out. From there it was only a short walk to the Pukeahu National War Memorial Park. The Cenotaph stands over it and the brown stacky things are an ANZAC (Australia New Zealand Army Corps) memorial presented to New Zealand by the Australians.

After a toilet and photo stop, we wandered up the hill to where the former Dominion Museum/National Museum of New Zealand stood – behind the Cenotaph, and went inside.

We’d arrived just in time for a tour, which was made up of another couple, and they kindly waited until we divested ourselves of our coats, bags, and Thunderbirds are Go goodies. “That’s precious.”

The exhibition was divided into two section. One section was a collection of colourised photos, to enable you to see the war as it was – in full colour. Not just an imaginary world of greyscale and sepia. The other half of the exhibition was a timeline showing the evolution of the war. The pictures spoke for themselves, but the timeline was better seen with someone to explain it all. We were lucky that we had (according to our ticket seller) an excellent guide.

I think his name was Mike. I’ll call him that anyway.

We started out wandering through a full-scale representation of a Belgian or French town. One that in early 1914 had no idea what was going to hit it. By the end of 1918 it was literally flattened and almost wiped off the face of the Earth. It was only those places that were rebuilt by its residents that ensured that it wasn’t.

First stop was a short explanation about why the war started in the first place. There was a lot of aggro going on behind the scenes, but it was the assassination of the Austrian heir to the throne of Austria-Hungary, Archduke Franz Ferdinand and his wife by a Yugoslav in Sarajevo, that really started “the dominos falling.”

Did you realise that King George V, Kaiser Wilhelm II, and Tsar Nicolas II were all Queen Victoria’s grand-children? The Kaiser was Queen Victoria’s favourite and she even died in his arms. (He was also the head of a couple of British regiments, which made for a sticky situation in 1914 until he was ousted from the job.)

So much for family loyalty.

There’s also a theory that Queen Victoria was responsible for the Russian Revolution. It’s because of her that haemophilia passed down through her family, to Tsar Nicolas’ son, Alexei. Remember that females can only carry and pass on the haemophilia gene. Males suffer from the disease, which prevents blood from clotting. If Alexei hadn’t had haemophilia, the “mad monk” Rasputin wouldn’t have been brought into the family circle and started to hold sway over the ruling classes. Without his influence the revolution wouldn’t have started.

And there is another theory that Queen Victoria’s father, wasn’t her father. There weren’t any cases of haemophilia in the family until after her. Being female she had to be a carrier. This could only have come about if one of her unknown ancestors was a carrier of the gene, or if Queen Victoria had a genetic mutation that created the gene.

That’s if I remember that episode of Qi correctly.

Mike said that he can’t understand why Gallipoli rates so highly in New Zealand’s consciousness. The number of Kiwis killed in French and Belgium skirmishes dwarfs the number who died at Gallipoli.

This exhibition was broken into years. To pass from year to year you walk through a huge memorial arch that is designed to look like one of the headstones in the Commonwealth war cemetery in France or Belgium. On either side of the arch are photos of the headstones, taken so they line up with the arch.

As a thread running through this exhibition, we followed a recruit called Will. We first saw him in full Weta Workshop-sculpted glory standing in the recruiting office, telling the sergeant that he was 18. He looked younger and possibly was.

At first everyone thought WWI would play out like every other war up till then, but it quickly became obvious that it was the war of the gun. Military leaders were still using age old fighting and advancement techniques, only to have their men mown down by guns and heavy weaponry. Or stitched up was the phrase that began then and moved into modern parlance.

Horses were used to tow heavy guns. They too were mown down. 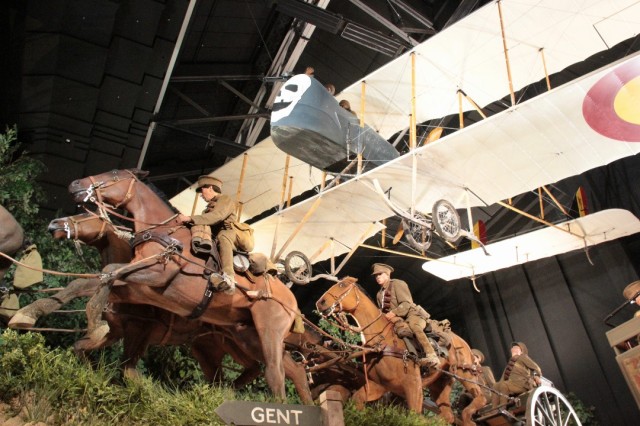 English buses were shipped across the channel and used as troop carriers. The replica on display showed how they had a quick coat of green camouflage paint slapped on them. A hasty job that sometimes meant that the advertising signage was still visible.

Each year had a different life-sized diorama. There was the tank with full crew (and pigeon-post pigeon) traversing a Turkish trench with the terrified Turks looking up at it.

Have you heard why tanks are called tanks? They were originally going to be called “Land ships”, but their code name that they were built under during the war was “water tank”. The name stuck. Similarly, land mines. The original underground explosives were laid by miners who’d dug tunnels underneath the enemy position. So the explosives were laid in mines.

We met Will again in his trench, reading letters from home. Another solider was eating breakfast. One was spotting with his periscope and another was a sniper.

The last two times we met Will were at the end. In 1918 he was shot in the arm and shoulder. The last we see of him is with his grandson, the sleeve of his cardigan folded up and pinned so it doesn’t flap about. He’s not saying anything to his grandson, who’s looking rather bemused by it all, because soldiers from the First World War didn’t. They either couldn’t, didn’t feel that they could because no one else would understand, or else were told that the horrors they remembered were all in the past and not to worry about it anymore.

We then had a look through the photo gallery with its colourised photographs.

It was all rather sobering.

Then as we left we were told that they were just about to play the Last Post and lower the flag at the Cenotaph.

If it hadn’t been so cold and blowy, we probably would have gone down the many steps to observe the ceremony, but by the time we’d put on our jackets and things (and hugged the poster to protect it), the ceremony had already started. So we stayed at the top of the steps and watched as a naval cadet(?) lowered the New Zealand flag. Only when we thought the ceremony was over, did we head back down.

On the way back to the hotel we had the obligatory stop at The Warehouse (D.C. wanted some cheap sandshoes as her shoes were acting up. She got them and some new gel inner soles.) We also called into Noel Leeming as the card reader that I bought yesterday didn’t work with my SD card or micro SD card. Of course it worked perfectly in the shop. And when I got back to the hotel.

We had tea in the on-site restaurant – lamb with pepper and lemon, kumara crisps, pea pesto(?), and fruit salad for dessert.

When we got back to our room I tried typing up my blog, but only got as far as the end of the Thunderbirds are Go experience before I had to put the light out at 11:00pm.