I haven’t had the chance to write up today’s blog, (I haven’t finished yesterday’s yet!), but here’s some photos from today. Remember these are 2.4 times human scale.

During the night the wind roared against the side of the building. The Bay Plaza has eleven floors and we’re on the seventh, so you can see how exposed we are.

After breakfast, where we’d requested that we have one serving of porridge in two bowls as yesterday’s helping “was too much of a good thing”, and were able to fit in fruit, yoghurt and toast as well, we left to walk the ten minutes to Te Papa – the national museum of New Zealand.

It was pouring with rain.

We had our full wet weather gear on – waterproof shoes, waterproof over-trousers, waterproof raincoat (we left the cold layer at the hotel), waterproof cover to our bags – and we expected to be able to leave all this soaking gear in Te Papa’s locker room.

Fortunately, Te Papa was allowing entry to its foyer early. I’m not sure if that was a standard thing, or if it was because there was a conference of members of “Leaders Real Estate” going on upstairs. There were certainly a lot of them and they were very noisy when they congregated outside their meeting room.

Also waiting for the early bird entry was the group who’d been on the Thunderbirds are Go experience and then had been having lunch where we went.

We’d paid for an early entry ticket to the “Gallipoli – the Scale of War” exhibition. This meant that we were allowed in half an hour early at 9.30am, we taken directly to the exhibition and given a very brief explanation by a guide, and before having the freedom to wander around until the hordes arrived at 10.00am.

The locker room didn’t open until 9.45am. So we had to drip our way around the exhibition.

Because we only had half an hour extra we ended up rushing through the exhibition, getting photos of the figures while no one was out. Until D.C.’s camera ran out of batteries. Then we left the exhibition…

There was already a queue.

We went downstairs to finally get rid of our bags and wet weather gear, had a loo stop, and asked at the Te Papa shop if they sold batteries. They didn’t but the BP Service Station over the road did. So I dashed over and got them for D.C. I had stopped raining by this point. It was then that the Te Papa shop told us that there was a locker on the second floor and wondered why no one had told us about it.

Now that D.C. had her camera at the ready, we went through the exhibition again. The queue had dissipated by the time we walked to the entrance, so we were able to go straight in. There was already a crowd.

The exhibition was made up of more than the 2.4 times scale people. There were 3D relief representations of the countryside around Gallipoli, and onto it was projected the advances and retreats of the Allied and Turkish forces. There was a computer generated image of a skeleton and you selected your weapon of destruction of choice and it showed you the damage that weapon did on the human body. Things like how a grenade would tear through a limb, shattering leg bones so the leg dangled form a scrap of tissue.

Yesterday’s exhibition was a more general overview of the war; especially New Zealand’s involvement in it. Te Papa’s focused on individuals and it was their giant representation that we were confronted with.

The first one was the lieutenant (pronounced lefttenant for anyone who doesn’t speak English) who went in on the first wave, egging his fellow soldiers on to glory, was shot in the arm, invalided out of Gallipoli and had the arm amputated. He was a right handed artist. He then had to train his left arm how to paint so that he could maintain his livelihood.

The second one was a doctor who’d thought he’d known what to expect as he’d been in the South African campaign. He’d been so shell shocked by what he’d had to deal with – a never-ending stream of casualties with wounds he’d never seen before – that he was invalided out after two months.

Next was a young soldier who, like many of them, came down with illness. He’d still been ill when he’d come back on sentry duty and had dozed off. This is an offence that carried the possible penalty of death. Because of his previous good conduct, he escaped this fate – only to die on the battle fields four days later.

His representation showed how flies were ever present and got everywhere. Especially once dead bodies started lying about the place becoming a breeding ground. We were told yesterday how those bodies would start to putrefy and swell up in the sun. Soldiers from the either side would shoot their enemies corpses to release the foul smell as a kind of chemical warfare.

Remember how each of these figures were 2.4x normal size. Remember also how each hair had to be implanted individually.

There was a representation of a trench to give you an idea of how enclosed the spaces were and of the noise going on around you. It was also suspended in such a way that you could feel the vibrations of the exploding bombs and grenades.

Then we had a nurse. This one had been on a hospital ship. She’d asked for news of her brother from soldiers, who had seen him, but didn’t know of his fate. She found out when she received her letters to him back; stamped with “Killed. Return to sender.” She found out four months after the rest of her family at home had been informed.

The last figure was a solider wading through a field of poppies.

You’ve got to wonder at the stupidity of some people and what they do during war. The worst were the ones that sat back in their warm, dry, safe offices and played god. 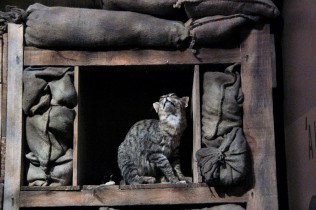 After “man’s inhumanity to man” we checked out the natural world. First stop was “Awesome Forces” about geology and how seismology affects New Zealand. Of course we had to have a go in the Edgecombe earthquake simulator. Following that was the “Sea to Sky(?)”, which is about New Zealand’s mainly avian wildlife – and also has a skeleton of a pygmy blue whale. Which is one of those exhibits that everyone knows and everyone wants to see because they remember seeing it last time.

A bit like the Colossal Squid, which was dissected on live-streaming Internet. I remember trying to watch snippets of it, when I was working.

By now we decided that we were hungry, so we went and had lunch from the Te Papa café. I had a chicken pie, salad, and Mac’s green apple juice – $11.50. D.C. had pumpkin soup. The carrot cakes (which were tempting, but we left on the shelf), had little marzipan(?) carrots on them.

After lunch we went to the “Golden Days” exhibition. In this you wander into a junk shop as the shop’s owner closes up. A montage of New Zealand events and achievements, and Kiwiana is shown on screen and every now and then one of the “bits of junk” comes to life. A cow’s head moos. Toy soldiers march. A cricket ball rolls along the ground…

It’s always great fun, but it’s about twenty years behind the times. It needs updating. 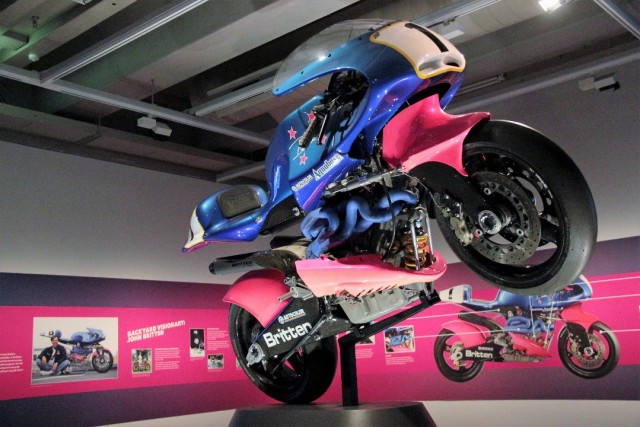 We saw racehorse Phar Lap’s skeleton. (His hide and heart are in Australia who also claim him.)

We had a wander through the representation of the New Zealand bush that’s outside. It was a little chilly, but I didn’t need more than the three layers I had on. Merino “thermal”, blouse, International Rescue jumper. I was hoping to find a Nikau palm I could photograph to show you what Gordon’s shirts are based on, but I couldn’t.

After reading about how some New Zealand flora and fauna were named – after people, places, similarity to other things, oddities about the creature, each of the biblical three kings… We decided that it was time to leave. We collected our now dry gear and started putting it on in readiness for going out into the cold, but dry, late afternoon. It was just after 4.00pm.

It was my original list of questions for Weta Workshop… From the last time we were in Wellington… Two years ago! Why did we still have that and what had it been hiding in?

It went back into my bag for the next two years.

We walked back to the hotel, completing 6999 steps for the day, and the wind had picked up a lot, but there was no sign of any rain. I did some blog typing, until just before 6.30pm.

We met Ann a few years ago when she was creating a photographic artwork based on the scrapbooks that Uncle Fred (Nan’s cousin) had created. Around that time, she met Duncan and they subsequently invited us to their wedding. They’d moved to Wellington (we stayed with them last time) and we were going to catch up with them again. Duncan’s mother had caught the Northern Explorer from Hamilton, so after he’d picked us up, he collected his mum, and we headed to their place.

Once there we had a very convivial evening with delicious Ann-made Shepherd’s Pie being the starring attraction of the meal. We sat and talked until it was time to make tracks and Duncan kindly brought us back to the hotel instead of insisting that we walk or catch the bus. 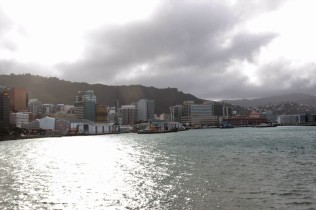 The weather wasn’t quite as good as day one.